So you love yoga and you’re a super high powered office type with NO TIME to get to class today. You love the idea of doing a bit of yog to spruce up the day, but don’t want to look like a total weirdo as you’re doing it? Yeah me too. So I’ve put together a covert yoga sequence that you can do without anybody noticing a thing. I even put a tie on, to be extra incognito, but that’s optional. So switch off your monitor, adjust your wheelie chair, shut out the distractions, and focus on your breathing for the next few minutes. You may even want to warm up a bit, in which case you could run up and down the stairs a couple of times. Then take five to ten breaths in each pose.

(I don’t work in an office anymore, because I live the dream, so I had to take these pictures next to my desk, but you’ll get the idea.)

Oooh yeah I forgot, you might still be hungover, in which case you could already be doing yoga without realising it:

Just breathe. It’ll be ok in a minute. It probably won’t, but, y’know, it might. This pose and strong coffee should get things moving. Just be careful to sit up slowly for the next one:

Not like that. Don’t slouch. Sit up nice and tall, shoulders over the hips, beachbody abs ever so slightly engaged. It’s almost like you’re trying to catch the eye of the person working in front of you, over the top of the monitor.

Sitting tall? That’s better. Let’s push on. Arms up for the side stretches: 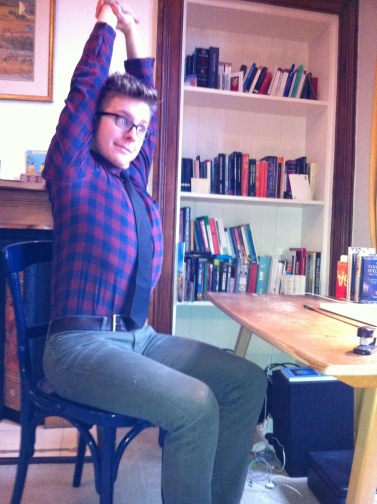 Repeat on the other side, to make the point. 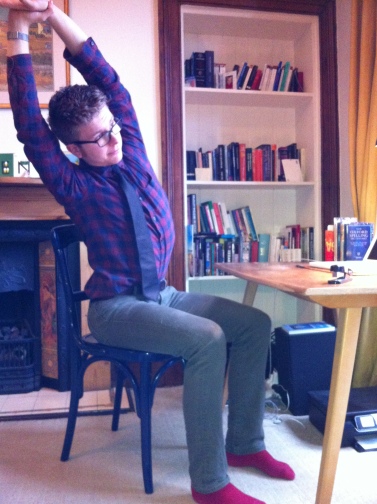 Excellent work so far. Just a case of staying focu- oh wait, was that an email? Yeah I know I told you to turn off the monitor, but you’re still reading so you didn’t, unless you printed this out and stuck it to the pinboard (which you should, btw, for future ref). Anyway, some idiot just sent you a file they scanned in and didn’t bother to rotate it. Pain in the neck, right? Luckily, there’s yoga for that:

Drop both shoulders for this one. Open the other file. Goddamit! Not this one too? Over to the other side:

Hold for 5-10 deep breaths, and try to focus on how therapeutic this new perspective is. Take the sort of breaths that’ll stop you raging all the way down to third floor sales and ripping that scanner’s head off, for wasting time. The sort of breath that looks like this:

Now lets get to the back of the neck.

This one’s great after those neck releases. You can take this further, if you want:

If that gets awkward, try this swan dive. Gets into the front of the shoulders: 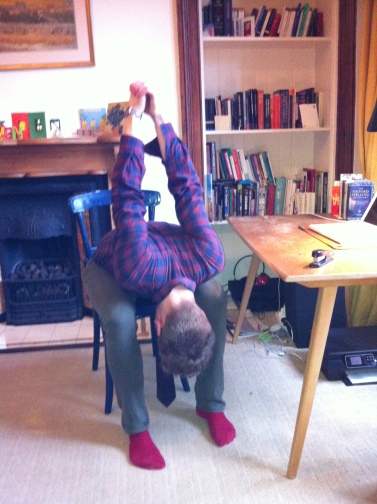 And finally, the twists:

Repeat on the left side, louder.

Found it! And relax. That’s you all set up for the day, nice and energised. Who said yoga didn’t make stuff happen?